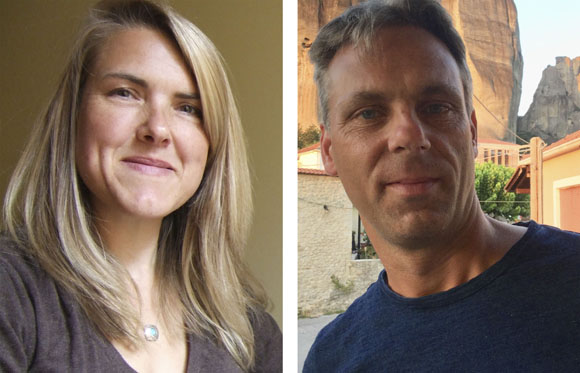 We have worked together as a partnership since the early 1990s creating multi-media installations and interventions in response to a wide range of sites such as museums, heritage sites, country parks and the public realm. We are fascinated by the blurring of boundaries between real and virtual space, light, material and architecture. We have used projection, light, illusion, interactivity and immersive installations to explore the processes behind the world of appearances and facades, to reveal hidden narratives or create ambiguous meaning.

Taking the image beyond the screen to become a physical experience is an important aspect of our practice such as creating projections on an architectural scale that fuse with the built environment. Examples of these architectural projections include Floe, commissioned by Hull UK City of Culture 2017 and Centrefold commissioned by Donegal Public Arts to celebrate the opening of the Regional Cultural Centre in Letterkenny in 2010.

We have been awarded numerous commissions and residencies, and have collaborated widely with programmers, engineers, fabricators and architects. Our work is often site specific, using diverse technologies from low-tech, natural light projection to 3-D laser scanning and high speed film.

Recent work includes Casting Light, commissioned specially for the Red Room at Mottisfont National Trust (2020); Luminary, created for Crossness Pumping Station in London, commissioned by Peabody in partnership with Crossness Engines Trust (2019); Aerial, a film installation commissioned especially for The Birds Without Borders exhibition at the Royal Albert Memorial Museum in Exeter; Ship of the Gods, a large scale video projection, light and soundscape event commissioned by Absolutely Cultured as part of Urban Legends: Northern Lights and shown at Hull Minster (2018) and The Ripple Effect, a Trust New Art commission for Lacock Abbey (2018).

We continue to develop new ideas and ways of combining data, light and projection with architectural spaces.

We are two British artists who work in collaboration and together have a broad, cross disciplinary practice which encompasses installations, interventions, large scale projection events, films and photography.

Our approach is predominately site specific with the development of the artwork evolving through a process of research and in response to the context of place, history and community. Through the work we aim to convey or enhance a sense of place, to reveal hidden narratives or create fictional ones. We work with digital media, projection, illusion, light, optics and photography and frequently juxtapose ephemeral media with physical materials and structures to suggest alternative or ambiguous meanings. Observing the movement and flow of people within the space can also inform the nature and configuration of the artwork.

Many of our projects have evolved through a process of engagement and/or collaboration with people from other disciplines such as architects, engineers, programmers and fabricators. We have made work in response to a range of environments such as museums, galleries, heritage sites and the public realm.